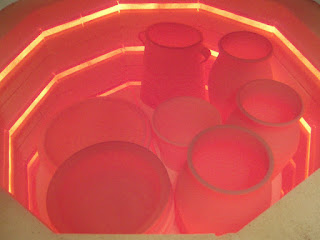 The last three weeks have really tested my patience. “What patience?” my husband would say. Well, I do have some, and it did!

When one of my kiln elements failed three weeks ago, I decided it was time to make some of the changes I’d wanted to make with my kiln and replace some other parts proactively. Get it all done at one time. Since my studio space is rather small, I wanted to put my kiln on a stand with wheels so I could move it near the wall when not in use to free up some space to work. When I purchased this kiln, I reused my old kiln vent and that old vent was now showing signs of pending motor failure. It was a model where the motor sits right underneath the kiln and the exposure to heat for so many years had taken a toll on the motor. So I opted to replace it with a new model with the motor on the wall, away from the direct heat of the kiln.

I think the root cause of the element failure was some glaze getting on the element and ultimately during a firing melting on the element and in cooling causing stress and a break to the element. When I removed the element from the holder there was clearly damage to the holder as well that could affect the performance and life of a new element. So… in addition to element and thermocouple replacement I also replaced two element holders that appeared to have some damage. Even though the other elements checked out okay with the ohm meter, I like to replace all the elements and thermocouples at the same time so I know that barring any accidental damage, I should have years of service without equipment failure. (crossed my fingers, knocked on wood and did a little dance to the kiln gods that they will shine success on my firings)

To top it all off, kiln shelves were cleaned of old kiln wash and a nice, new white coat has been applied. They look beautiful.

I’m ready for the first firing of this rehabilitated kiln. I’d ask you to wish me good luck, but I’m not superstitious. I know the finger crossing and wood knocking won’t really help. But the dance for the kiln gods, that’s what really does the trick.