So… last week I showed you some of my favorite results from the last kiln firing.  Today, I want so show some of the things I wasn’t so fond of.

In this firing I had a number of larger bowls with slip chatter design in the bottom.  Most of them turned out great, but a few had some significant bloating.  It’s hard to see in this photo, but this is probably the largest bloat at approximately the size of a quarter.  The bowl was at the front of the kiln near the bagwall. Speaking of bloating… check this one out.  The side photographed was facing the fire and just above the bagwall. 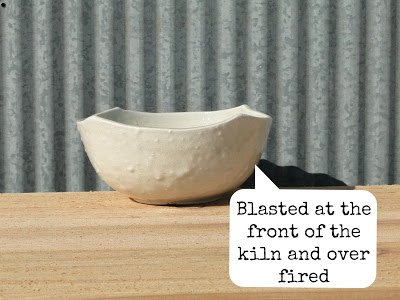 The entire top part of the kiln fired a little hotter than usual this time.  On top, cone 10 was touching the shelf while on the bottom it was just getting soft.  Contributing factor to the bloating issue?  Not really sure, but I’m going with that thought for now and hope to really keep an eye on the next firing to keep the top and bottom closer as well as making sure nothing in the front hangs over the edge of the shelf.  We’ll see if that helps. My last disappointment was with the Woodfire Porcelain I was testing.  Its a great clay body to work with, but my disappointment came with the lack of color in the firing.  The bare clay stayed pretty white through the firing and I guess I was just hoping it would take on a more toasty color.  I don’t necessarily dislike the color of white clay, but I can get that effect in my electric kiln.

If made from B clay, the mug in the photo below would have been a golden brown with black dots rather than just white with black dots.  Lesson learned… I like my B-clay and Buff Stoneware. 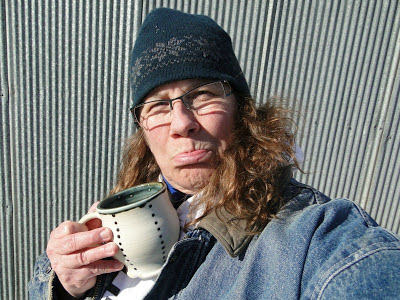 Now to apply these lessons for my next firing.  That’s always the hardest part.  If anyone has any suggestions on the bloating, I’d love to hear them.  Be well.