I’m pretty much perpetually behind, but today I did a little catching up.  I managed to get some week old pots I’ve had under plastic trimmed.  Now it’s time to tell a little bit about my firing last weekend.


Fellow potter/blogger Rebecca Brandow (Becky) of Willow Avenue Pottery in Panora Iowa joined me for a woodfiring.  We had perfect weather and Kevin and I very much enjoyed Becky’s help and company. 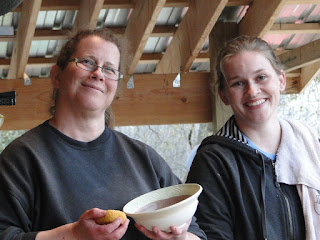 Friday was glazing day.  I added several new glazes for this firing so in addition to the pots, there were a number of glaze sample tiles in this firing. 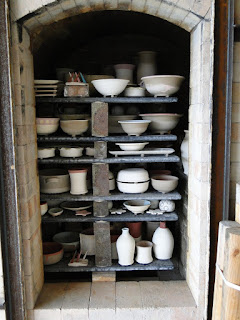 By mid-day Saturday, we pretty much had everything wadded and loaded in the kiln.  Kevin made us some delicious potato soup for lunch and we started a fire.  While putting a layer of mud and newspaper over the door bricks we couldn’t resist putting this cheery cow picture front and center.  Seeing it made me smile every time I looked at it. 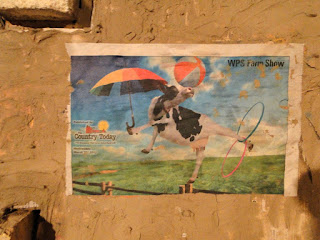 We put Becky’s favorite vase on the bagwall near a peep hole so she could keep a watchful eye on it through the firing. 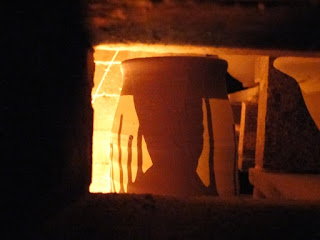 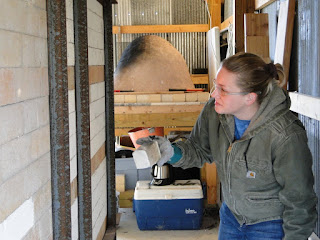 Sunday we finished up and Becky made her long drive home probably grateful she’d be hundreds of miles away and not tempted to peek in at the results in a slowly cooling kiln.
All in all, it was a very enjoyable weekend, with perfect weather, hard work, and lots of conversation about pots, being a potter, life in general and a few Minnesota/Iowa jokes.
As a matter of fact, I was so busy talking and explaining things while bricking up the door, I totally forgot to put leave the lower spy hole pulled out a little bit so it could be pulled out.  I didn’t think of it until we’d already had a fire in the firebox so we had couldn’t keep an eye on the lower set of cones during the firing.  Just another stupid thing I’ve done in a long list of stupid things.  Probably won’t make that mistake again.  Thanks Becky for not including that in your blog post and you’re always welcomed back.