One thing after another…

My husband is rarely home when I leave home. He’s an earlier riser and beats me out the door everyday. Yesterday he didn’t. I left before him. And hit his vehicle as I backed out of the garage. I didn’t even look for anything behind me, because I’m so used to not having to. Big sigh and head shake. Stupid, stupid, stupid. That will teach him for sleeping in.

Later that day, while running a glaze load, I realized my kiln was running way behind in the firing schedule. After watching it much more closely for a little bit I discovered that one of the elements wasn’t working and it didn’t appear this load would make its temperature. Now that its cool and I unloaded the very under fired glaze ware, I can see the very obvious failure of the element. See the dark spot on the element? It is broken there. 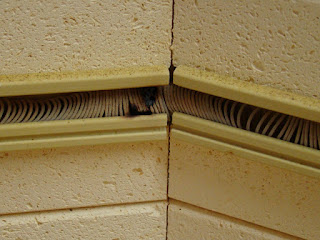 I’ve had a few other kiln maintenance items I’ve wanted to do, so this is a good time to get to them. I ordered up replacement elements, thermocouples, and element holders as well as peep hole plug since I’ve broken two of the three. Now its just time to wait until the parts arrive so I can put everything back together.

Since I have stacks of green ware, bisque ware and now under fired glaze ware sitting around everywhere (my studio space is small), I thought I’d mix some glazes I’m getting low on instead of making more ware to sit around waiting for a functional kiln. I’d purchased all the chemicals I needed months ago anticipating a time when glazes would need to be replenished. Or did I?? Both glazes I started were missing one ingredient. So… now their both sitting incomplete waiting for more chemicals to arrive. I’ll keep the UPS man busy this week.

I’m hesitant to start anything else so I thought I’d write this post and take the rest of the day off. Tomorrow is another day and maybe more things will work out then.

Thanks for visiting – Be well.